I found a new get-outside-and-find-stuff-with-advanced-technology game.  As you know, I have been Geocaching for the last couple of years.  While this is a fun activity, a combination between Letterboxing and Orienteering, it has its frustrations.  Geocaches are hidden containers with paper in it that is often wet (moldy) and hard to write on.  In larger city centers, there are few places to hide anything bigger than a pack of gum, and containers frequently gets stolen by innocent and not-so-innocent "muggles", making them impossible to find and get credit for.  The owners of these missing containers can take weeks or months to replace them when they are damaged or lost. 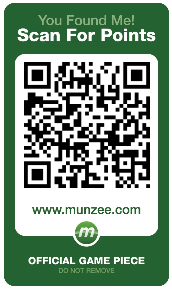 This new hide-and-seek game is called Munzee, and instead of finding containers, you seek out Qr code stickers plastered all over the city; stickers that blend in with other graffiti or labels, which most of the public will just walk past without a second glance. The Qr stickers are about 1 1/2" and waterproof, stuck to light poles, street signs, cable boxes and other metal containers--anything that seems permanent and isn't private property.  Once you scan it as found, you earn points for the "capture".  Most are 5 points each, but you can earn more with special Munzees, like mysteries, motels, diamonds, and Clan Munzees.  The link above explains all the different types.  You also earn points for any finders of stickers that you have placed.

It's a fairly new game--only been around for about 3 years (as opposed to a decade, as Geocaching, and about 1/3 of the finds are in Germany where it caught on first, about as many as there are now in the US)--so there are not as many particpants or finds, but it's really cheap and easy to deploy a new Munzee.  It's as simple as slapping a sticker on, scanning it, and typing in a name.  Boom!  I ordered a bunch of stickers and will start venturing into areas to deploy them.  There's certainly not as much maintenance...if the sticker disappears, you can just retire it, or go back and put a new sticker there.

They're also much easier to find than Geocaches.  They have to be put in places where you can actually scan with your phone, so they're more out in the open; easier to spot.  Another bonus: they're often clustered together so it's easy to get 20 or more in just a couple hours.  Today's walk around the lake garnered 27 finds in about 90 minutes.  Unfortunately, all that walking--about 2 1/2 miles--has done a number on my feet.  They're really quite sore now.

I've been knitting a bunch on the Norwegian Olympic sweater.  Making progress--just a few rows a night, often because half-way through a row, I realize that I've made a mistake and I have to back up quite a ways to fix it.  It'll take a while.  Maybe even until next winter...but that's OK.  I'll love it all the more when it's finished!
Posted by Karen at 11:16 PM 1 comment:

Happy Birthday To Me

The day started like any other Monday, kids waking, medicines taken, and driving everyone to school. Three kids and not a one of em remembered it was my birthday. Sigh.

Took some time to seek out some Geocaches and have a cuppa from Starbucks, but as soon as I got home to get a fresh battery for my phone, I got a call from Cammie saying she was sick and she wanted to come home. I picked her up and brought her home, but that put an end to the cache hunt for the day.

Saturday, I had several people over for a party to celebrate another rotation around the sun. In all, about a dozen people came by to wish me well and share in some cake and burgers and Jello Brains. Everyone left at an early hour...by 10 pm...surely a sign that my friends are old.

On Sunday, Kelly and I watched the Sounders game and some other TV shows while I knitted on my Olympic cardigan.  I'm happy to say that the Sounders won!  And I got about 2 inches knitted on the sweater.  It's slow going since the two color patterns take some concentration.  1 light, 2 dark, 1 light, 3 dark, 2 light...

Going to get another quilt on the racks, ready to get done up.  Hopefully I'll stay on track to get two quilts a week done.  I have four quilts set aside to get done for customers in the next couple of weeks, but still have six more of my own to get done by mid-April as well.  TEN quilts!

I got the first of six quilts done on the long arm, the Triple Irish Chain.  This is the quilt that I started in 2007 when we were in the process of listing the house to move south.  It got tucked into a box for a couple years after moving...like 5...but eventually I pulled it out and started working on it while Ben was in the hospital.  Then a year later (last month), I finally got it out and put the outer border on it.

I was thinking about stitching across the chains and doing a lovely medallion in the center of each white area, but knew that it would take a month to finish something like that.  I hunted around and found a long arm continuous pattern that fit into the "Irish" theme.

I have to squeeze in a customer quilt, which I have loaded up on the long arm already (though I had to run out to get some blue thread to finish it), then I have a couple of choices.  I have the Modern Jelly Roll Race, the Pineapple Party, and a couple scrappy quilts to finish before April 25th.  I'm hoping I can get one done every few days--two a week would be nice.

Tomorrow we need to attend a funeral.  It's sad, especially since I think she wasn't that old...although when I do the math, she was 72 and had some significant health issues for a long time.  She was such a colorful woman with tons of energy and enthusiasm; a real zest for life, music, and the arts.  RIP, Carol.  I don't know when we'll be getting home; I was hoping I could make it to the quilt guild meeting in the evening, but I don't expect we'll be able to get into town early enough.  I talked to Debra, an SCA and quilt buddy, who said that she could deliver my stuff to the meeting--the quilt show forms and the swap squares--and I'll take her out for coffee next week or something.
Posted by Karen at 9:01 PM No comments:

Alright, let me climb on up here and get loud.

The GSUSA has decided to team up with leanin.org to try to "Ban Bossy".  Another word that the feminists want to ban from our vocabulary because it "teaches girls not to be leaders" or some nonesense.  They say that girls are told to stop being bossy when in fact, these girls are "leaders" and are held back by a masculine society who wants to step on the necks of girls with moxie and enthusiasm.

Bossy kids (boys and girls) are the ones who are pushy about wanting to get their way without any concern about the interests of others.  Those are the ones that say, "We're playing TAG, whether you like it or not!"  It's verbal bullying.  Do I want to ban the word?  Not a chance.  Call a spade a spade.

On the quilting front, I finished the big customer quilt project that I've been pounding out the last few days.  Thread changes, different patterns in different areas, and binding--which is not something that customers always want, but a few want it *all done* when it comes back.  Looking at other longarm quilters, they charge more than I do, but when you add up the amount per inch, even at my rate, there's a little sticker-shock.  Most long-arm quilt prices for binding that I saw were .15 per linear inch just to stitch it down on the top--the customer has to stitch it down on the back.  Top and back started at .20 and went up to .35 per linear inch.  This customer's quilt is 400" around...at .15, that's $60; at .35 per linear inch, that's $140!  Just to put the binding on!  I decided to go cheap.  Some may think I've devalued my work, but thinking about the hourly wage, and how long it took me to do this particular job, it seems like a LOT!

One more day of cookie sales...we have to leave in a short while with our 142 boxes...I hope we sell out.  We won't have to do this again for another year...or maybe not ever...depends on how many girls decide to renew their Girl Scout memberships.  We haven't done any activities or worked on any badges.  School work has taken precidence over scouts, as well as her other interests.  We'll see how things come together eventually.  Maybe we can do some badges over the summer.

Gotta do a quick recount of the boxes...and then we're off.
Posted by Karen at 1:28 PM No comments:

My Cookie Mom (the co-leader who is in charge of ordering and managing the cookie accounts) gave me this idea for taking cookies to and from the vehicle and creating a ready display.  Underneath the cases, individual boxes are neatly lined up in the wagon, ready for sale.  We set the cases behind us or next to the wagon, and prop up one box of each variety for display.  We were hoping to sell upwards of 4000 boxes (a really crazy goal, but still...) but I suspect we'll be closer to 1500 or 2000.

I have three quilts sitting & waiting for me to work on them.  The one that is racked up now just needed batting--the stuff she gave me was the same size as the stuff I had on hand--only 90" wide and the quilt is 93" x 108".  So today, after a THIRD customer dropped off her quilt, I scampered off and found a batt that's big enough.  I'll get that started first thing tomorrow after the kids are dropped off.  Hopefully I can get that one mostly done and be ready to start the next one on Wednesday, which is a fairly simple quilt, but has a thread color change and some flauna to quilt in.  The last one should be really quick and easy--it's a simple all-over stipple.  Once those are done, I can finally get started on my SEVEN quilts that I need to have done for the quilt show.  I have just a couple weeks to ensure that they're all quilted.  I can spend one weekend doing all the binding, but all the paperwork needs to be in with the chairs by the next guild meeting on the 20th.

I'd love to have a quilt ready for binding, which I could work on while sitting with the girls while they sell cookies...at least for as long as my fingers can handle it.  The last few sales were SOOO cold!  One night it was 32 degrees...we were all jumping up and down trying to keep warm.  Lena went into the store (Lowes) and found some foot warmers, so we stuck them into boots, mittens and hats to keep us warm.  Unfortuantely, the weather kept the numbers of shoppers down, and while the sales weren't awful, they weren't as inspiring.  All three of the girls were learning a lot about sales techniques--like instead of selling just one or two boxes, suggesting 5 boxes for $20.  They're also asking for people who buy one box at $4 to donate that last dollar to buy cookies for the soldiers.  Most people agree.  Up-selling a box for the soldiers is always great, too, especially for people who say they're on a diet or can't eat sugar.  These patriotic girls discussed it on that cold night and decided that this really was all about helping out our Nation's Finest. :)