Yeah, it's been few and far between.  The end of the school year is nigh and things always seem to ramp up in May.  The play practices increased and then they performed.  The Middle Schoolers did the junior version of Fiddler on the Roof.  Bekah was our consultant for the play, being a Jew.  She gave them a "Jewsultation" (her word) and taught them some of the traditions of living as a Jew in Russia.  Some of the traditions they got wrong...but given that it's a group of Catholic kids...not too bad.
Here are a few photos:

Ben went to see the play with Kelly and the next day, he decided to be the Fiddler on the Roof.

You can't make this stuff up.

Beads I made last week...I was going along great...then ran out of gas.  I went to re-fill the blue tank that I use but the big tank outside was empty.  Boo.

Kelly went and re-filled the large propane tank a few days later, which meant I could re-fill the small blue propane tanks.  These are some beads I made yesterday:

I just received some fabric in the mail to make another tunic for Tyrssen.  I started another one that I cannot find ANYWHERE.  I remember taking it to an event to sew the hems by hand, and I haven't seen it since getting home.   I've got to continue organizing things and unpacking bins and baskets--it's gotta be around here somewhere!  When I do find it, I can bill him for this purple tunic.  I hope to get it to him by mid-July so he can take it to Pennsic with him.

First project of the summer...replacing the rotting deck.  Kelly ripped off one set of stairs and demolished them.  The second set of stairs is currently still in place, so the yard is still accessible from the deck, although the entire deck will need to be replaced also.

Last weekend, I went to the Toppenish Rodeo grounds with about 800 of my closest friends.  Cammie and I were both perplexed about the location of the spa.  We never did find it.

I had made a few tweaks to the yurt so now it is about the right size and shape.  I still need to do a couple little things to the canvas walls and make a couple of longer rafter (uni) rods for the doorway.  I also need to get an additional rug for inside and cut the floor tarp to size.  I'd also like to paint the door...I'll have to find a design I like.

Cammie and I went together (just us two), and camped with Bekah, Lauri, James and a new friend, Craig (aka Aenor, Juliana, James and Grimm).  We shared a common kitchen and dining area and shared meals, cooking and cleaning.  We had a great time together and will definitely have to do that again!  I think we even came up with a household name...something that means Hodge Podge...maybe in Turkish.  Maybe I should ask my Croatian neighbor how to say and write it in her language...she doesn't like the Turks...

Cammie stole my phone and got a picture of me doing some fingerloop braiding.  I only wish my hair didn't look so...weird.

The fingerloop braiding was to make a favor for a gentleman who asked me to be his inspiration for May Crown's tournament.  The winner of this tourney gets to be Crowned Prince for 3 months, then elevated to King for 6 months (or thereabouts), and his consort becomes Princess and Queen.  If you enter the tournament, you have to commit to serving if you win.  If you don't want to serve, you shouldn't enter this tournament--there are lots of other tournaments that don't have this kind of obligation.  In fact, you have to kneel and swear an oath to serve should the fighter prove victorious.

This is Martin le Harpur, whom I've known for 20 years from my days in Shittimwoode.  Cammie got to carry the flag as we processed in.  I wish I had a flag to bring into the tourney field...or a nicer dress.  I was going to wear the red one, but I ended up getting pancake batter all over it.  Grrrr....

I took a panoramic photo of the "unbelted" entrants and their inspirations--we were on the "belted" (aka the knights') side.

There were around 100 entrants to this competition, so the chances of my becoming queen were pretty slim, and as it turned out, he was finished by the third round.  It was a fun experience, though, and an honor to be asked by a knight and an old friend.

Bekah/Aenor was inspiration to James.  She looks stunning in this blue gown, trimmed in hand embroidered flowers...she did it herself.  Her first project!  Awesome!

But first, plenty of sunscreen.

We got back home, dirty, smelly and tired, but we had a great time.  I discovered that Cammie needs new garb.  Desperately.  We're going to make a few new tunics for her this Thursday.  She wants an Elizabethan dress like one of these: 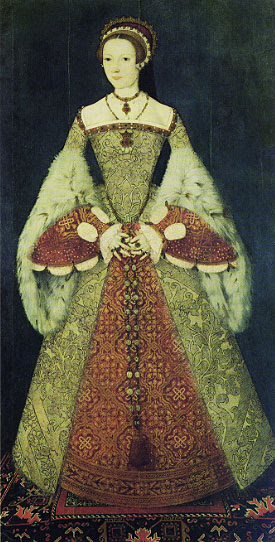 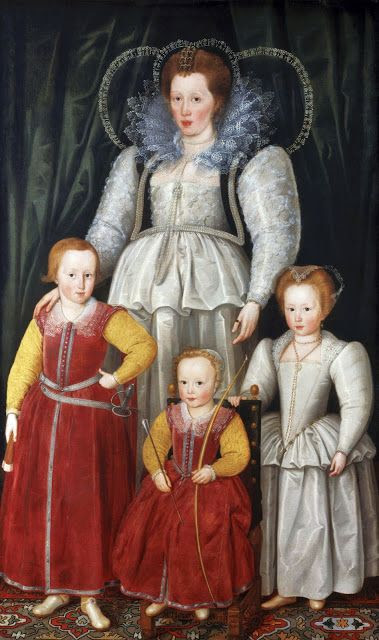 Although maybe not quite so fancy... 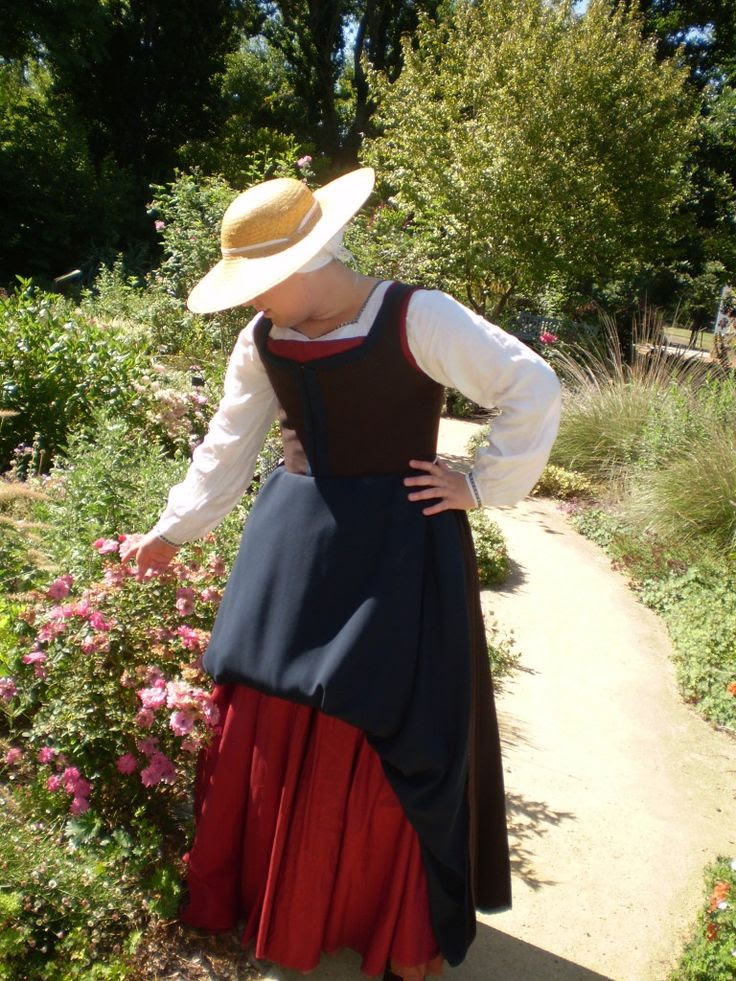 Maybe something more like this.  I might make it a few inches shorter so it's not a trip hazard for the kiddo.

She wants to shoot archery, Youth Armored Combat, learn blacksmithing, weave, and cook and she's well on her way.  We have to get her practicing with the bow & arrows, and get her armor kit together.  She volunteers to help Master Grendal the Blacksmith at most events we see him at (or tries to--I'm going to make her a leather apron, I think), and she made an apple dessert on site, from scratch, using the ingredients we had on hand.  Dude!  She also picked up a small lap loom at the event.  I'll have to teach her how to warp it up and give her some yarns to play with.

Looks like I've got quite a bit of work ahead of me...
Posted by Karen at 8:39 PM No comments:

I can't believe it's been a decade!  The little dude has made ten complete circuits around the sun and has driven us crazy entertained us the entire way!

He arrived into the world, a very average 8 lb. 3 oz., to join his two lovely sisters. 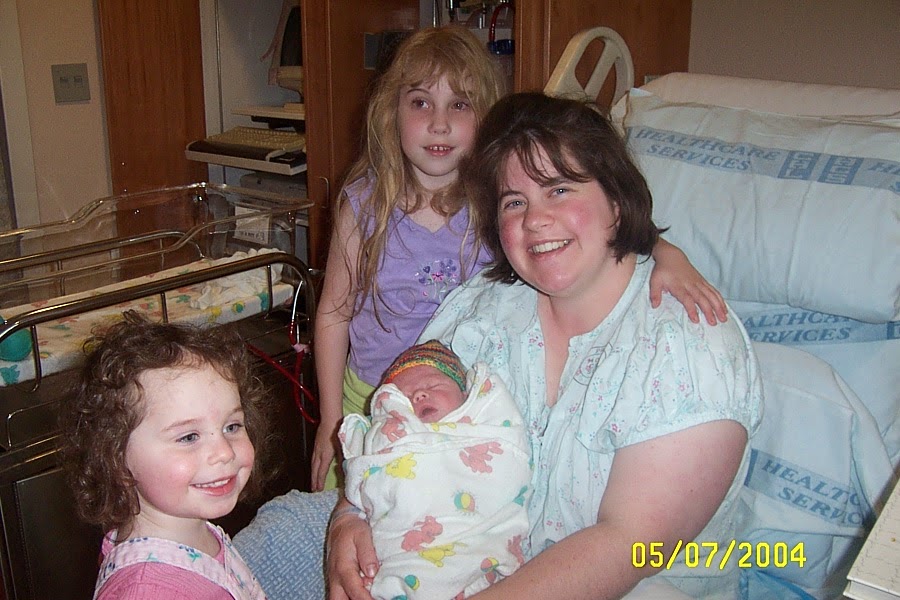 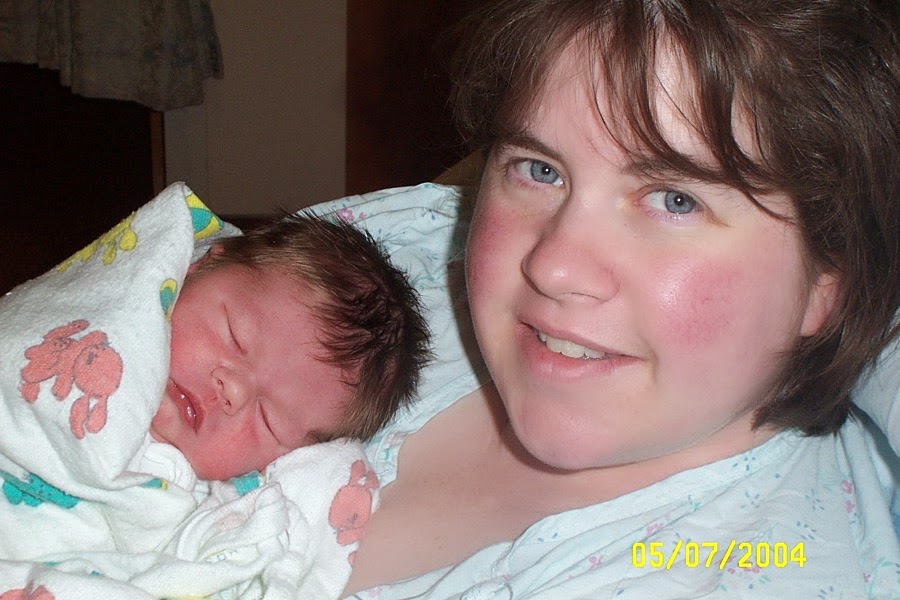 And he just gets cuter all the time. 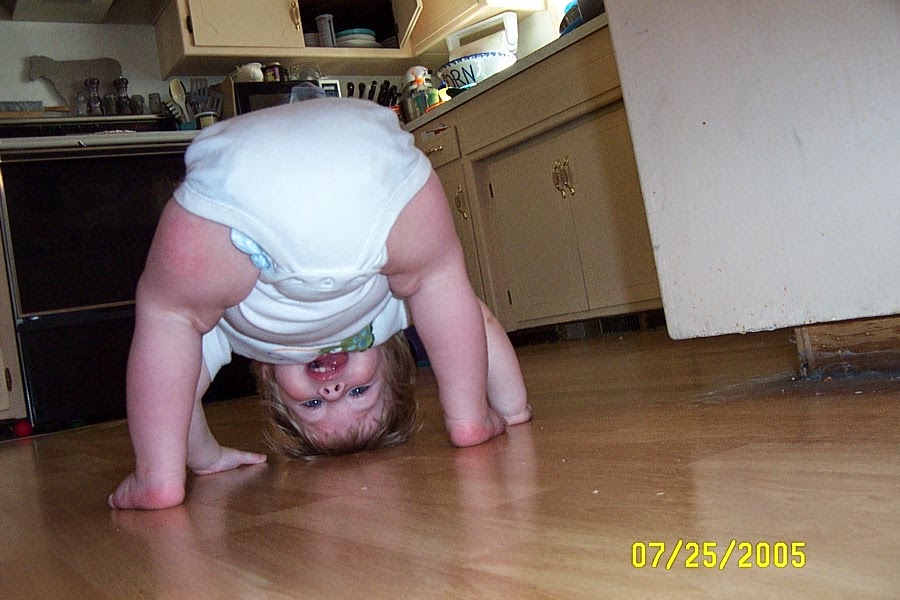 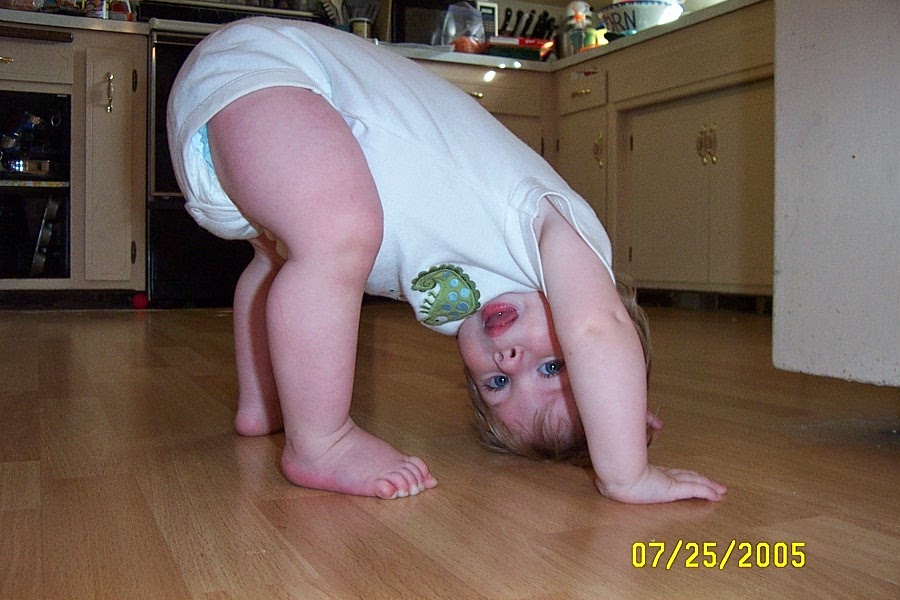 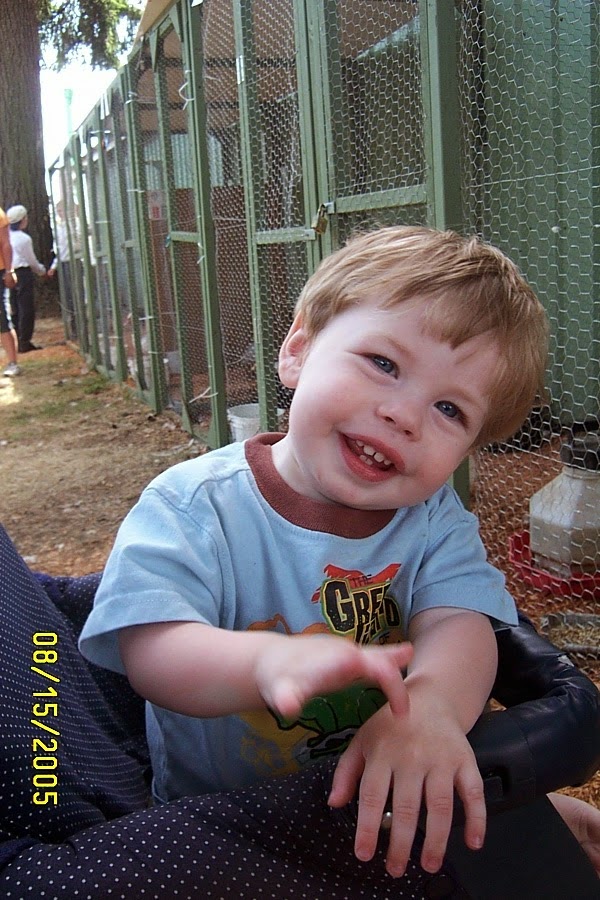 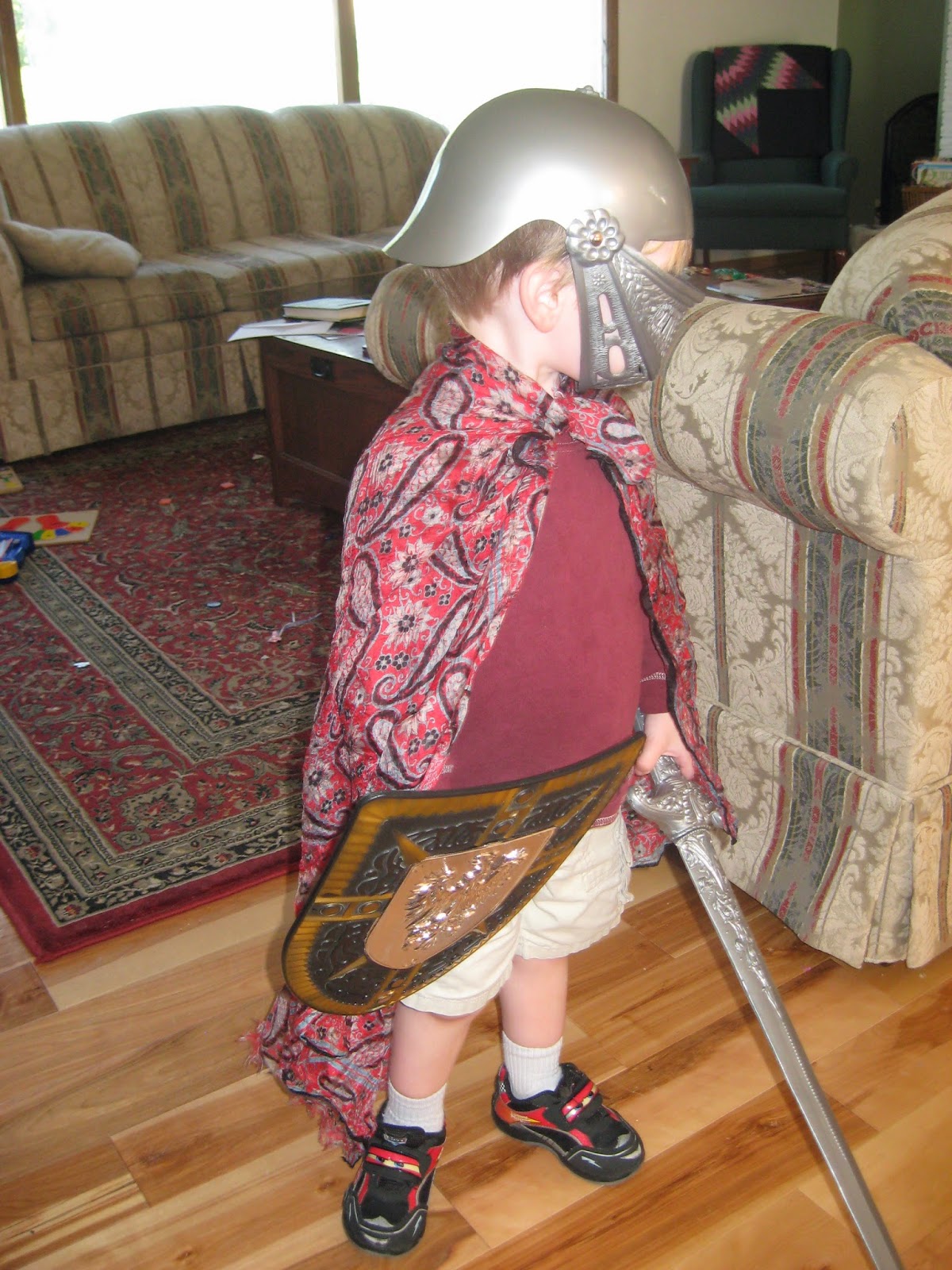 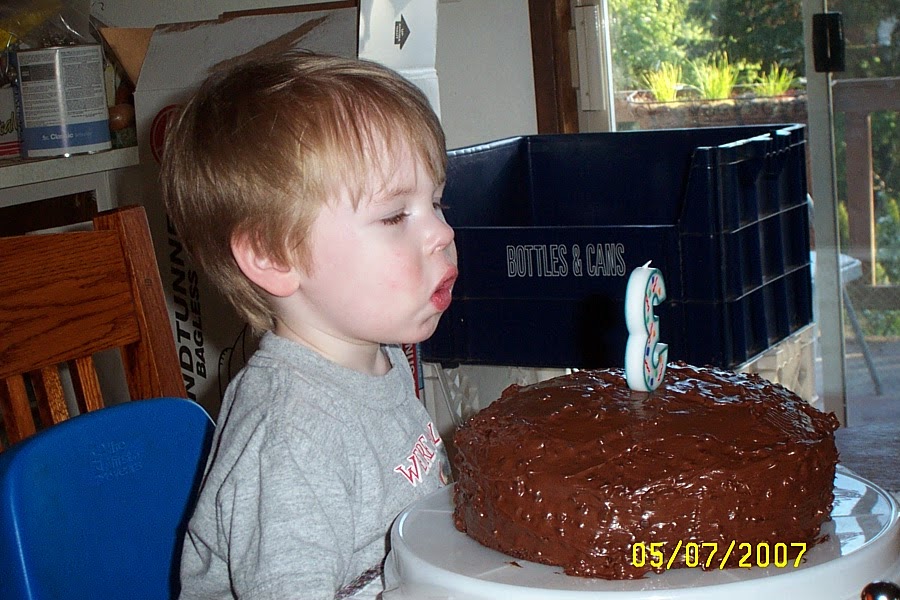 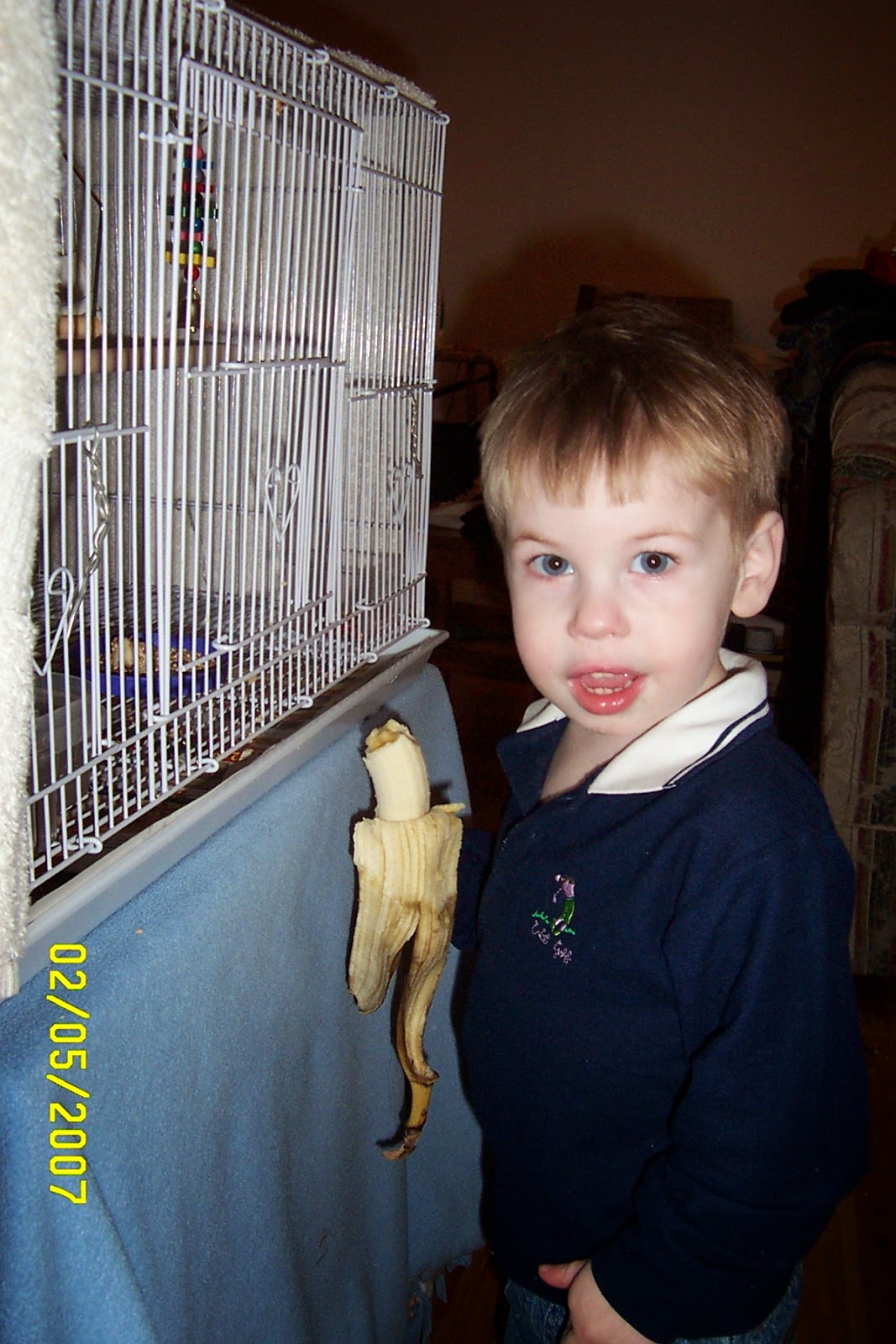 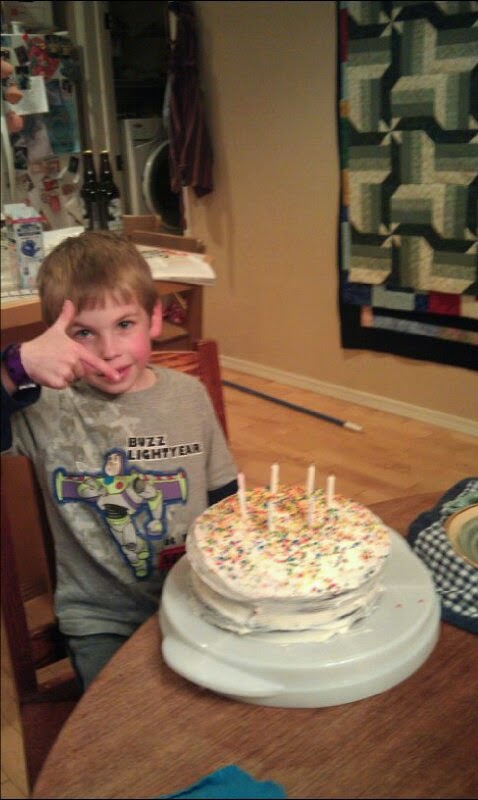 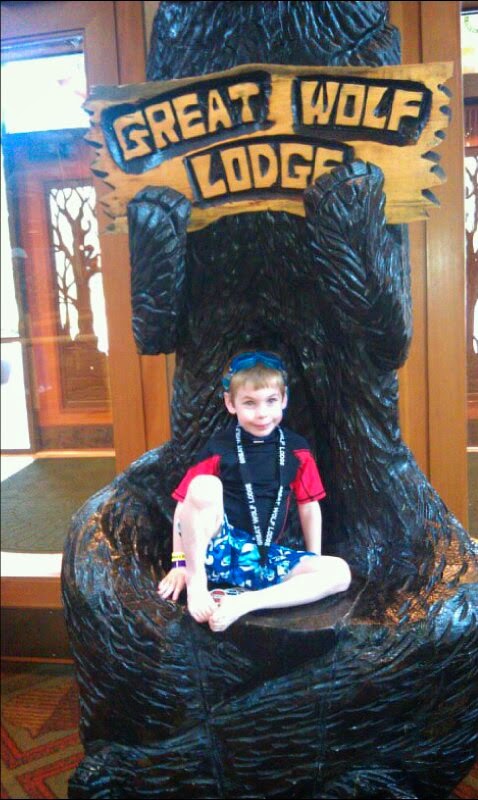 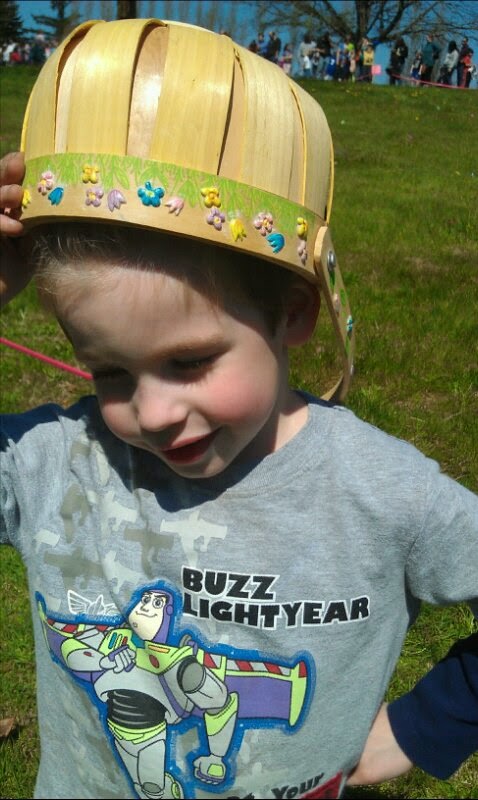 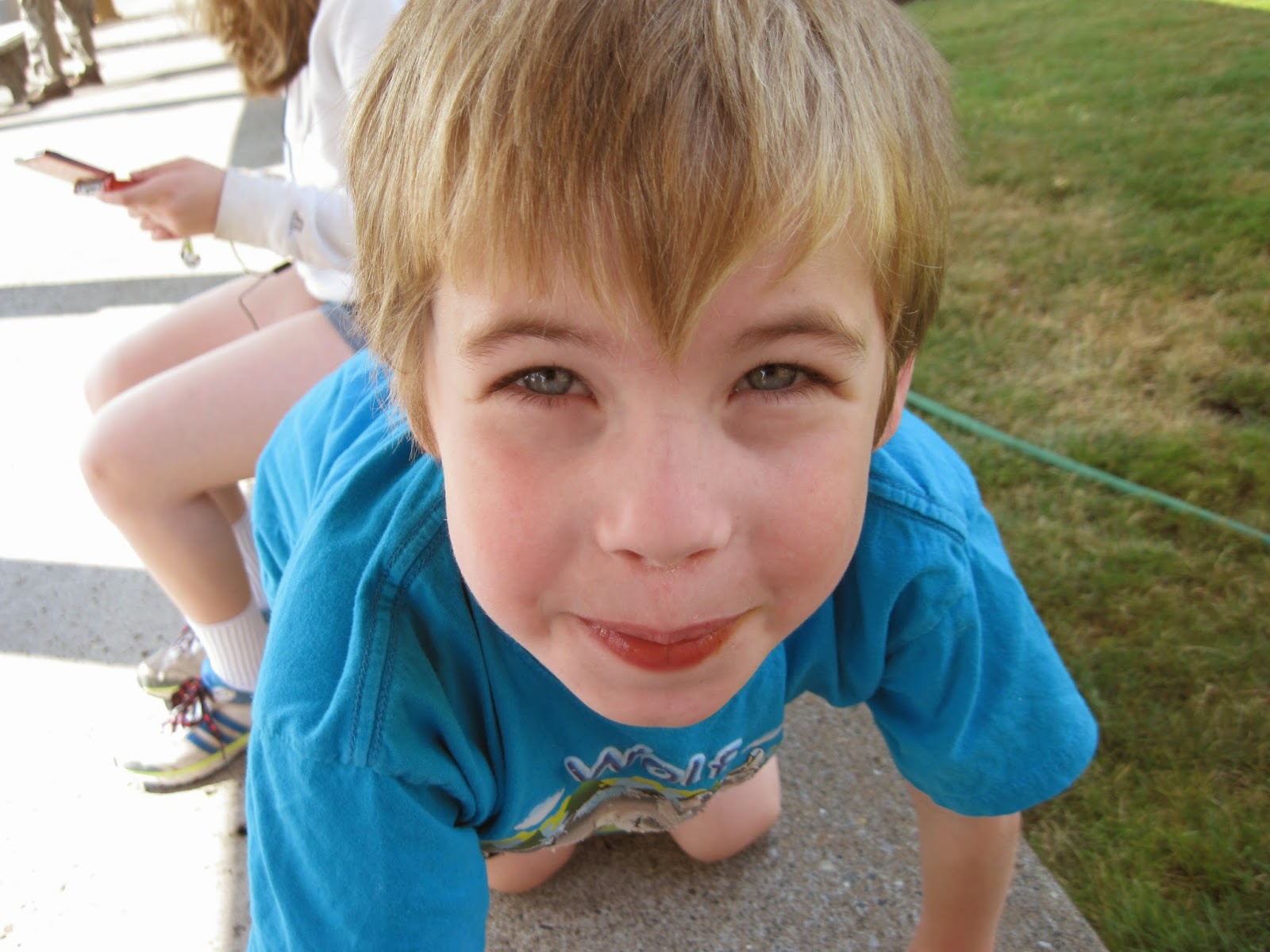 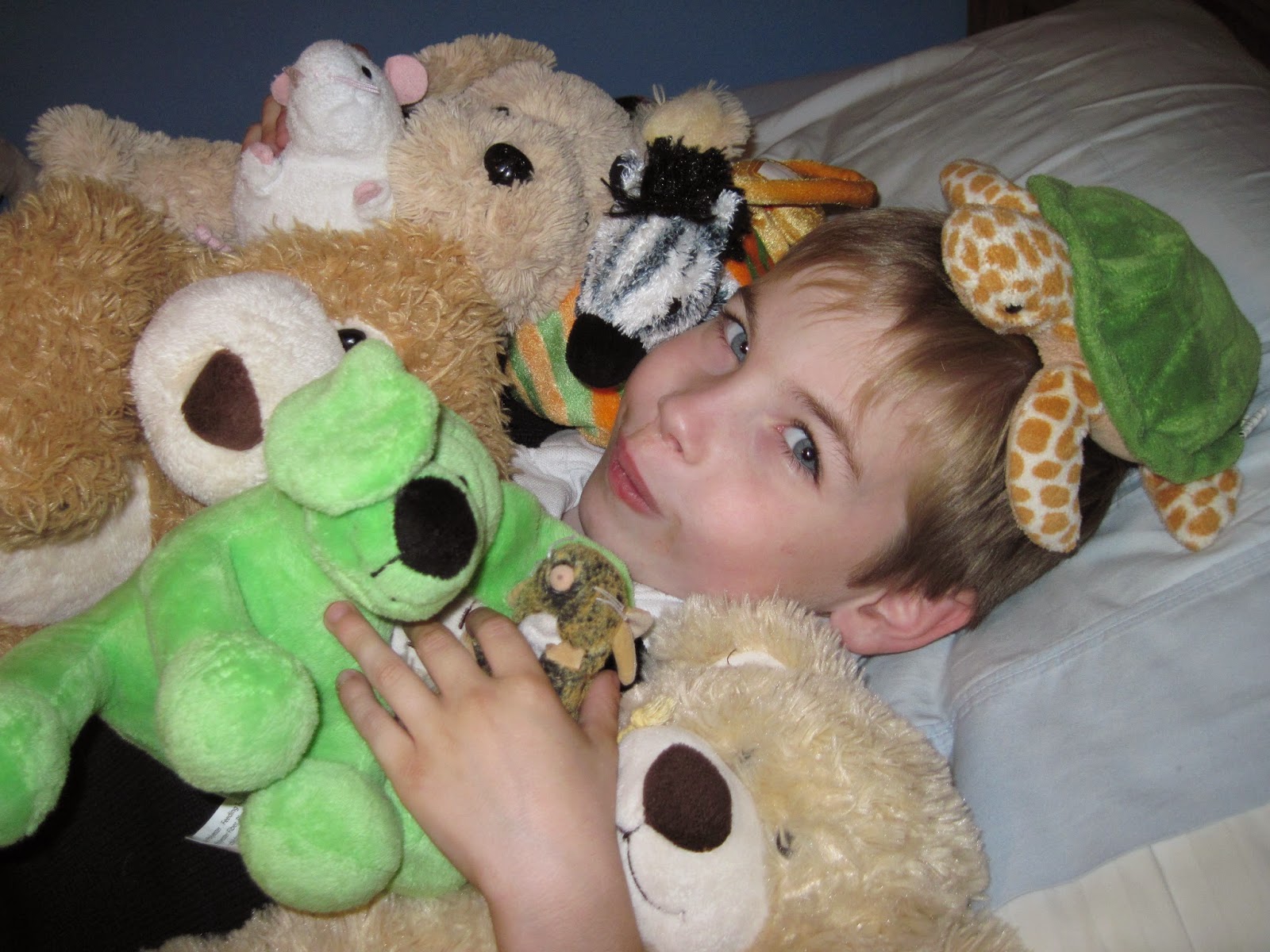 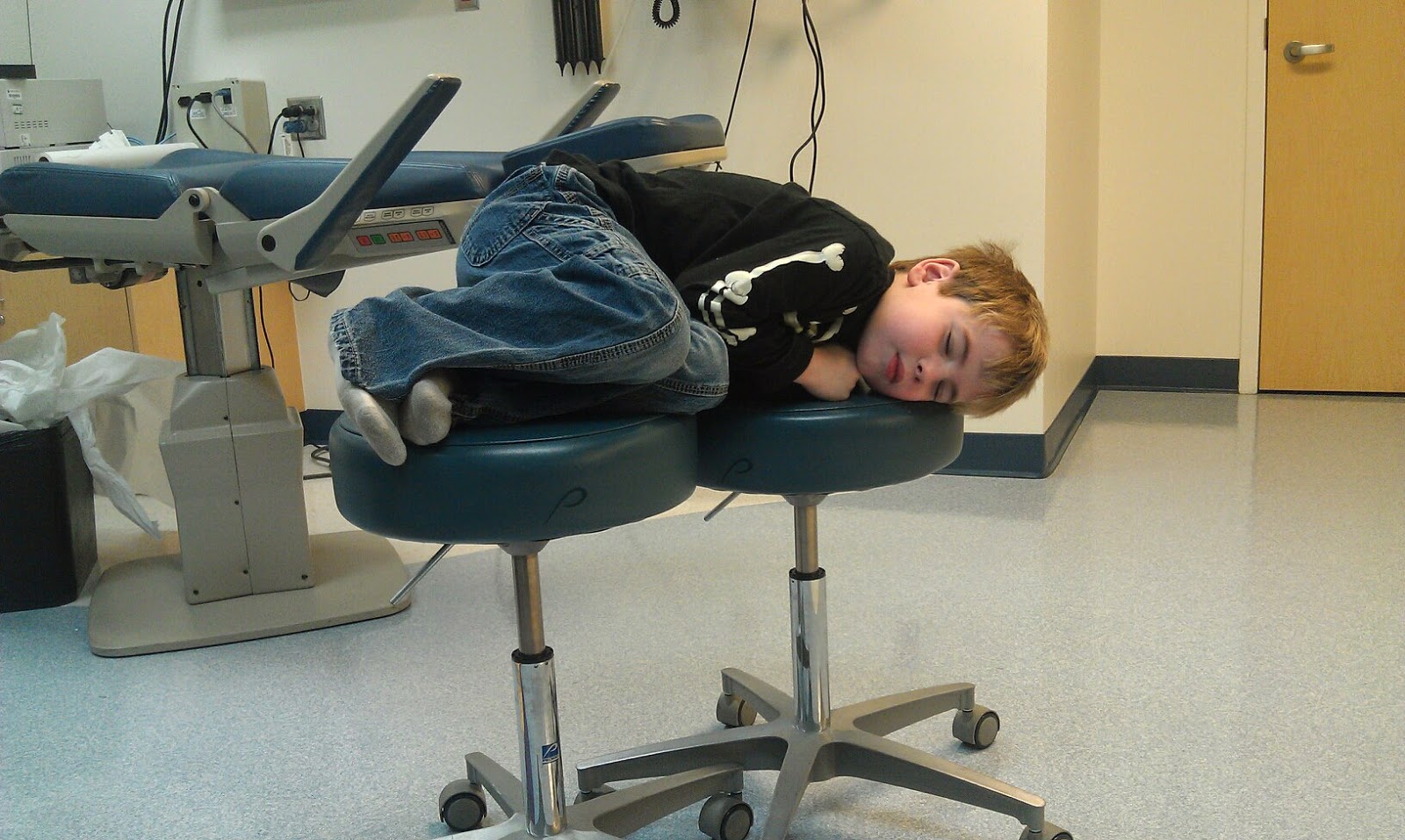 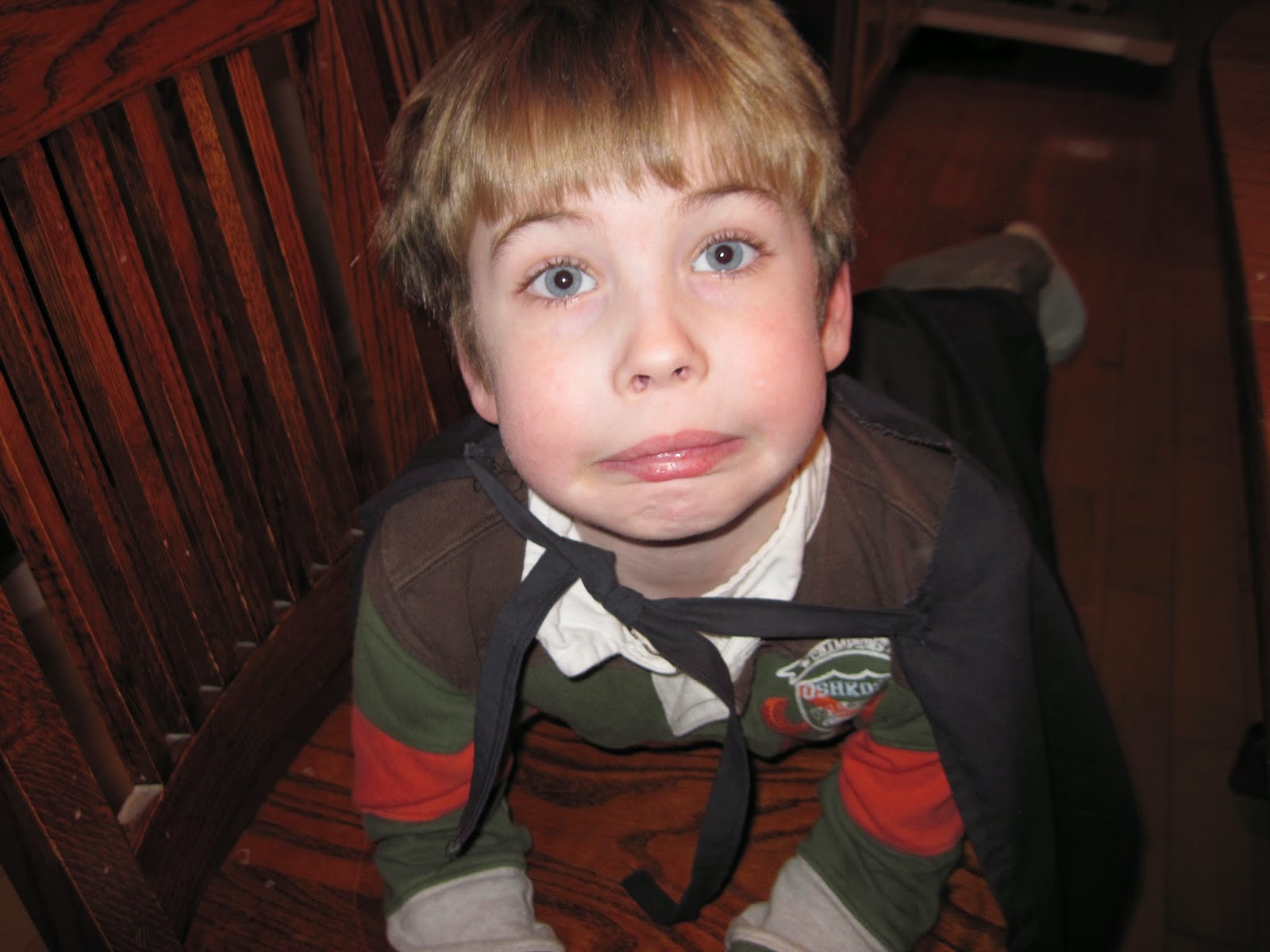 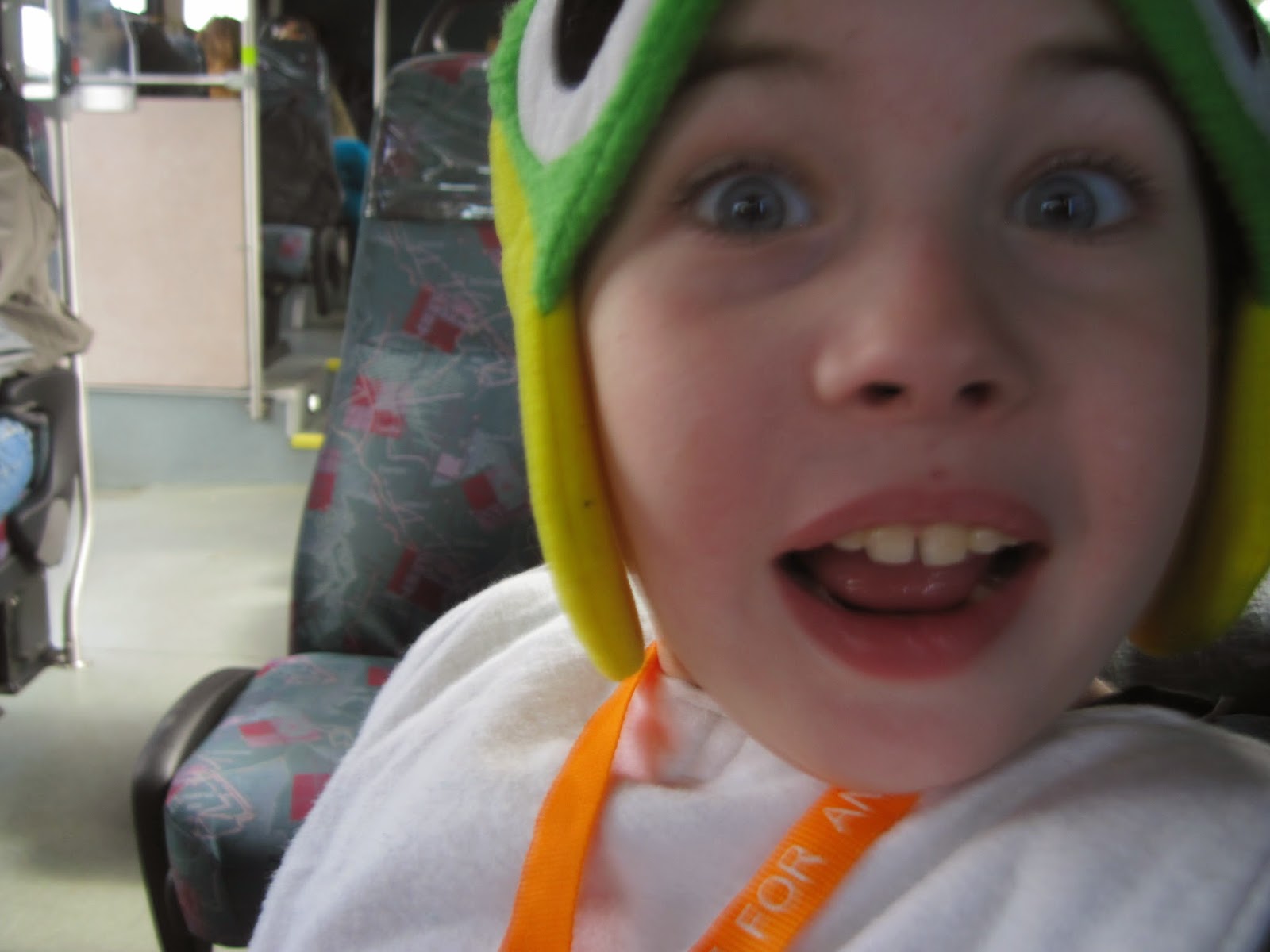